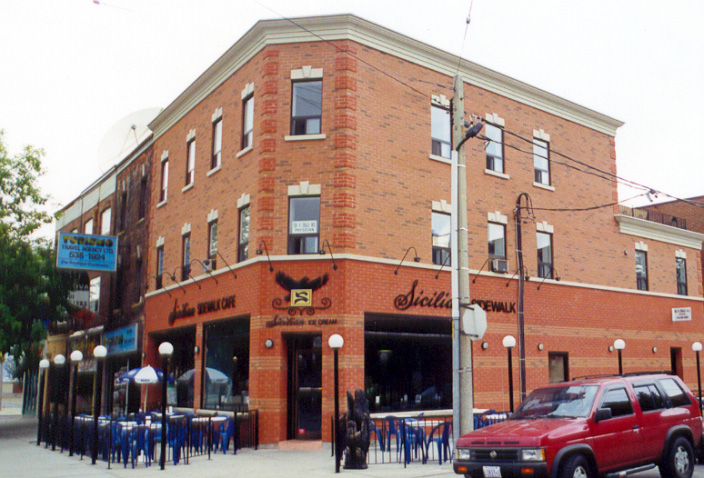 Sicilian’s is an Authentic Italian Gelateria, the oldest one in the City. The Pioneer’s of Italian ice cream. The granddaddy of Toronto’s Gelateria world.

Since 1959 our sophisticated European taste has been based on a secret family recipe of “100% Fiore di latte.” What sets “Sicilian’s”apart from everyone else is our homemade gelato. Our Product is our strength. It has been the cornerstone of our success. Sicilian’s, as it is affectionately known in the Little Italy neighbourhood, is World famous for their Tartufo creation, their traditional Sicilian Cassata and irrefutably the best Lemon Ice around. It has definitely been the place where you can get genuine Granita like the one served back home. In 1997 adding freshly baked Belgium Waffles and traditional homemade crepes to their menu.

This charming and vibrant Gelateria at the heart of College Street’s Little Italy offers an amazing breakfast, light meals and an extensive ice cream menu.

The outdoor patio which seats 72 comes alive and is bursting with activity throughout the summer, a perfect place to savour the neighbourhood and experience a little bit of Authentic Italian Heritage and Culture anytime

Over the five decades that Sicilian’s has been occupied the same spot on College Street, they have been featured in many articles some of which include; Toronto, Life, Toronto Sun, Where magazine, The NationaL Post, Leisureway, La Cucina Italiana,The Village Post, Corrierre Canadese, Panorama and Top Choice Magazine.

“Sicilian” has been repeatedly featured on CHINRADIO and CHINTV, as well as CityTV, OMNI, CTV, Global and Talk 640. It is not surprizing that they have earned a reputation for being a well-known site for reality shows, such as FOR RENT and FOOD ESSENCE, documentaries such as: Toronto: A Cultural Community, Portrait of a Street – the Soul and Spirit of College Street, and an off- beat location for CITY TV Weather. They have even been featured in Glen Cochrane’s Toronto, Tales of the City.

“Sicilian” is definitely the place to be for the Euro Cup and Taste of Little Italy in June and for the Taranta Festival in September.

Discover Delicious Decadence at our Landmark location on College Street in the Heart of Little Italy.

We accept cash, debit cards and all major credit cards